The medical opinions and advices contained in this blog are those of the respective authors and should serve as guides. The patient themselves have the final decision with what to do to their health.
IMPORTANT: To ask for medical opinion, send your message by email here


First the good news. Then the bad news.
The Japanese government allowed on Sunday the first foreign medical team to treat victims of the triple disasters—earthquake, tsunami and radiation—in the northeast seaside of the mainland Honshu that killed over 10,000 and left hundreds of thousands of people homeless.
Japan's law forbids holders of overseas medical licenses to practice medicine within the country but the health ministry lifted the prohibition three days after the disaster occurred on 11 March, The Japan Times said.

Order Your SIGNED Copy!
Visit my other blog EXPRESS YOURSELF

Freelancer.com - Academic Writing Article Rewriting Articles Blog Copywriting by Gino Matibag in Manila, Philippines
DO YOU LIKE THIS SITE? I APPRECIATE YOUR SUPPORT, LARGE OR SMALL! THANK YOU. 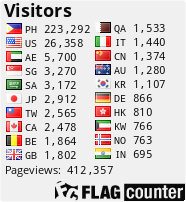